More than 15 million Americans have been taking antidepressants for 5 years or more and many of them are finding out they cannot stop making addiction a troubling side effect. 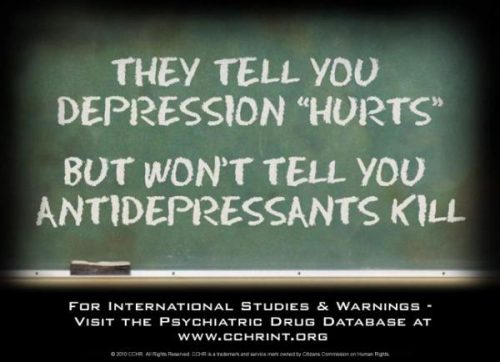 Over 8,800 people responded to the New York Times in a follow-up to its April 8th article on antidepressant addiction. The article exposed the severe difficulties people have had in coming off anti-depressants, since the widespread introduction of these drugs in America. [1]

The original article, “Most People Taking Antidepressants Discover They Cannot Quit”, pointed out that while these drugs were originally researched and marketed for short-term periodic use, today 15.5 million Americans have been taking them for 5 years or more.

Hundreds of senior citizens reported wishing to stop antidepressants as they had been prescribed them as a temporary, short-term solution. Long-term addiction or inability to stop taking these medications, was not part of the plan.

By the mid-1990’s, however, pharmaceutical companies convinced the government of the desirability of open-ended continuation of these drugs. “Marketers and some researchers implied that antidepressants corrected deficits in brain levels of serotonin, a neurotransmitter. In truth six decades of research into the chemical imbalance theory of depression and anxiety has not achieved scientific credibility. [2]

Another common tactic in use was to characterize the harsh withdrawal effects of stopping drug use as a “relapse”, and so assert that continuing medication “prevents relapses”.

A further boost to the proliferation of psychiatric medications, noted in the Times article, was the government’s 1997 decision to allow drug makers to advertise directly to consumers. By promoting a rosy picture of medicated states to the general public on a daily basis, manufacturers were able to greatly expand the market for mind-altering prescription drugs. “Everyone knew someone taking them. Long-term prescription rates surged,” the article, states.

Those wishing to withdraw from such medications usually cite to unwanted side effects as the reason they want to stop, such as sexual dysfunction and weight gain. Kate Slattery of Orlando, Florida wanted to stop Efflexor due to pregnancy. “When I stopped cold turkey, I felt extremely unwell and had to go back on and wean off slowly…prevented the dizziness, headache and fogginess I felt when I originally stopped the medication.”

As a further extension of the problem, in 2000 doctors started prescribing antidepressants to children. Today, recent estimates from the National Center for Health Statistics estimate that 7.5 percent of children between the ages of 6 and 17 are on psychiatric medications. [3]

These developments have prompted new concerns. The Mayo Clinic now publishes a guidebook helping parents “learn why antidepressants have warnings about suicidal thinking in children and teens, what to do before your child starts taking an antidepressant, and the warning signs of a potential problem.” [4]

The Times article also quotes Emma Dreyfus of Boston, saying that being put on Paxil at age 10 for anxiety was the “one mistake her parents had made”. Only at 23 was she able to slowly get off the drug. “I don’t blame them, but I wish we’d all understood the long-term effects.”

Even more disturbing is the report from a study released in 2016. This study reviewed and analyzed 70 antidepressant clinical trials with patient narratives for more than 18,000 participants, concluded that antidepressants doubled the risk of aggression and suicide in children and teens. [5]

“People need to know the truth about these dangerous drugs and demand true express and informed consent in which all potential side effects are disclosed and alternative solutions offered when a psychiatric drug is recommended as treatment for any condition,” said Diane Stein, President of the Florida chapter of the Citizens Commission on Human Rights (CCHR).

For more information on antidepressants and other psychotropic medication please call 727-442-8820 or visit www.cchrflorida.org.

[5] Antidepressants Double the Risk of Aggression and Suicide in Children, Study Confirms https://www.cchrint.org/2016/02/02/antidepressants-double-risk-aggression-suicide/