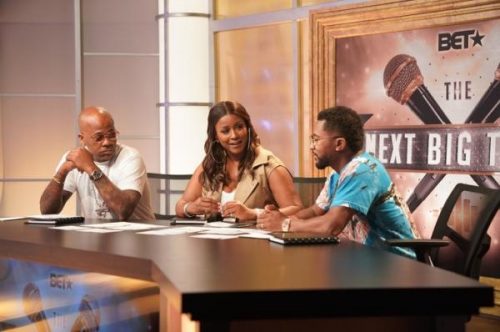 “We have reinvented the stale singing competition show for our audience,” explains Dame Dash. Handpicked hip-hop and R&B artists from across the country will compete weekly in survival-of-the-fittest challenges leading to a showdown where A&R executives, Serge Durand, Capitol Records; Erika Coulter, Epic Records; Tuo Clark, Def Jam Records and CEO Ghazi, EMPIRE Records will have the chance to offer a record deal on the spot. “This has never been done before and absolutely, not on this scale,” adds Executive Producer/Creator and “The League” member Tina Davis. “The finale will change someone’s life.

THE NEXT BIG THING premieres on BET Networks on July 9 at 10PM / 9PM CT. MEET THE JUDGES:

Tina Davis (Judge): The founder of Phase Too Inc. management company and current Head of A&R at EMPIRE Records, Tina Davis has been successful in several areas of the entertainment industry specializing in multiple genres of music. Her company managed and developed superstar singer Chris Brown for 11 years. Prior to that, Davis was a Senior A&R executive at Def Jam where she developed chart-topping artists and responsible for Montell Jordan’s “This Is How We Do It.” She was also influential in the development of such hit soundtracks as The Nutty Professor II, Rush Hour, The Best Man and How To Be A Player.