Children as young as 6 years old are being sent for involuntary examination in Florida without first notifying the parents or guardians and in 2016 over 32,000 children were Baker Acted. 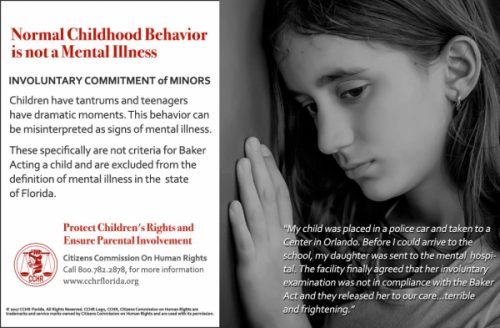 Encouraged by a change to the mental health law earlier this year that now requires a minor to be examined within 12 hours after arriving at a psychiatric facility during a Baker Act, the Citizens Commission on Human Rights (CCHR) of Florida has strengthened their campaign to restore parental rights and protect children from unnecessary involuntary examination.

The Florida chapter of CCHR, a non-profit mental health watchdog working to expose human rights violations in the field of mental health and dedicated to the protection of children, is asking state legislators to amend the current mental health law so that parents are contacted before an involuntary psychiatric examination is initiated on a child.

The mental health law in Florida, commonly referred to as the Baker Act, is named after Maxine Baker, the former State Representative from Miami who sponsored the Act, after serving as chairperson of the House Committee on Mental Health. While the original intent of this Act was to ensure patient rights and prevent abuse, the Annual Report of Baker Act Data, revealed in March of this year that 32,475 minors were sent for examination during fiscal year 2015 to 2016. Additionally in Florida, it is legal for a child to be Baker Acted without notifying a parent until after a child has already been taken into custody under the law.

Concerned over the surge in the number of children being Baker Acted annually, CCHR completed an analysis of the calls they have received from parents of children in Florida who had been sent for involuntary psychiatric examination over the past eighteen months. This analysis revealed that 70 percent of these children did not meet the criteria for an involuntary examination and yet they were still transported to a psychiatric facility, where up until the change in the law, they could be held for up to 72 hours.

“It is our opinion that the correct execution of the law would be to contact the parent or legal guardian for the purpose of obtaining consent for a voluntary examination before a child is Baker Acted,” stated Diane Stein, President of CCHR Florida.

According to Florida Statutes, one of the criteria that must be met is that a person has refused voluntary examination after conscientious explanation and disclosure of the purpose of the examination, yet this important step is omitted during the Baker Acting of a child.

This violation of human rights is happening to children as young as six years of age who are being Baker Acted without parental knowledge. A BuzzFeed investigative news report titled “HOW A 6-YEAR-OLD GOT LOCKED ON A PSYCH WARD” illustrates the abusive use of the Baker Act and the undermining of parental rights in Florida.

CCHR’s campaign to eliminate inappropriate Baker Acting of children educates parents on their rights while providing them with a form they can fill out and file with their child’s school to help protect them from an unjust involuntary psychiatric examination. This form uses existing state law to help protect parental rights and can be downloaded on the CCHR Florida website at 5 Simple Steps to Protect a Child. Additionally, any person living in Florida who is interested in protecting children from abusive Baker Acting are encouraged to sign a petition to stop the involuntary examination of children without parental knowledge at Petition to Protect Children. For more information on this campaign please contact CCHR at 727-442-8820 or visit the center at 109 N. Fort Harrison Ave in Clearwater, Florida.

About CCHR: Initially established by the Church of Scientology and renowned psychiatrist Dr. Thomas Szasz in 1969, CCHR’s mission is to eradicate abuses committed under the guise of mental health and enact patient and consumer protections. It was L. Ron Hubbard, the founder of Scientology, who brought the terror of psychiatric imprisonment to the notice of the world. In March 1969, he said, “Thousands and thousands are seized without process of law, every week, over the ‘free world’ tortured, castrated, killed. All in the name of ‘mental health.’” For more information please call CCHR at (727) 442-8820.