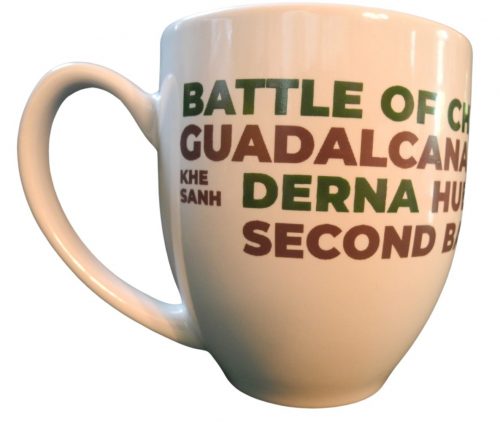 Check out this Marine Corps mug on Amazon

MWSB Inc. is pleased to announce that the company’s popular brand GotToHavIt has just announced the official launch of its US Marine Corps Famous Battles mug. The ten most famous battles of the US Marine Corps have been featured in this mug. This unique gift item is now up for grabs in Amazon for a nominal price of $17.47 only.

The Second Continental Congress meeting held in Philadelphia on November 10, 1775 passed a resolution for raising two battalions of Marines as landing forces with the fleet. This resolution led to the formation of the Continental Marines and the birth of the United States Marine Corps. Serving on land and at sea, these first Marines played a critical role in a number of important operations.

MWSB Inc. is a New York Corporation formed in 2008 with the vision of sourcing a unique range of products. Over the years, the company has built a clientele of delighted customers by delivering products that offer a special value or provide a special service. Their new product is a bistro style coffee mug that is microwave and dishwasher safe. The product is delivered in a beautiful box for gifting and ships in a protective packaging.

“As a mark of our immense respect for the United States Marine Corps, we are delighted to announce the formal release of our new US Marine Corps Famous Battles mug. Each of the names written on our 15oz Marine Corps Mug represents a famous battle in the history of the USMC. Please visit our Amazon storefront to take home this unique product,” said a senior spokesperson from MWSB Inc.

About MWSB Inc.: Since its inception, MWSB Inc. has been a leading company when it comes to finding unique products both for consumers and businesses. The company’s largest source of work is through client recommendation, highlighting its high level of client satisfaction.