Cruz, who has been charged with 17 counts of murder, was under recurring care by mental health practitioners during the five years preceding the shooting in Parkland including treatment for ADHD. 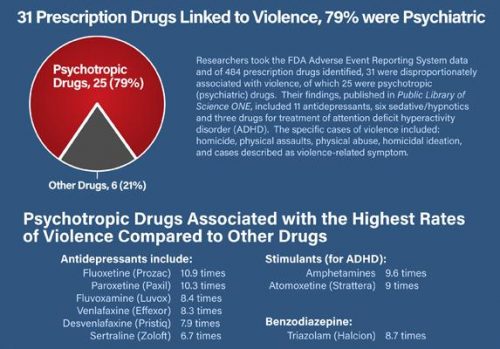 According to reports, Nikolas Cruz, who has been charged with 17 counts of murder and 17 counts of attempted murder, was under frequently recurring care by mental health practitioners during the five years preceding the school shooting in Parkland, Florida including treatment for ADHD. [3] While the exact treatment is not stated in the report, psychiatric drugs are commonly given to children, adolescents and adults labeled with ADHD despite the fact that there are no scientific studies that prove ADHD medications work or are even safe to use long term. [4]

Even more disturbing is that per a report published by the Citizens Commission on Human Rights (CCHR) International, researchers took the FDA Adverse Event Reporting System data and of 484 prescription drugs identified, 31 were disproportionately associated with violence, of which 25 were psychotropic (psychiatric) drugs. The findings, published in Public Library of Science ONE, included 11 antidepressants, six sedative/hypnotics and three drugs for treatment of attention deficit hyperactivity disorder (ADHD). The specific cases of violence included: homicide, physical assaults, physical abuse, homicidal ideation, and cases described as violence-related symptom.

“We have abundant thoroughly researched information demonstrating that psychiatric drugs create dependence, suicide and violence in a percentage of those taking them,” said Diane Stein, President of Citizens Commission on Human Rights of Florida. “The causal relation between psychiatric drugs and school violence is no longer in question.”

CCHR, a non-profit mental health watchdog that has, for 49 years, worked to investigate and expose abuses in the mental health industry, published the recent international report, “Psychiatric Drugs Create Violence & Suicide: School Shootings & Other Acts of Senseless Violence”, which documents the history of these issues since the late ‘80’s for the purpose of helping law enforcement, educators and policy makers learn how psychotropic drugs are a hidden link to the prevalence of violence and suicide in the community. In this report CCHR is clear that not every violent killer has been on or withdrawing from a psychotropic drug at the time of committing a crime, but in many cases such drugs emerge when learning of the killer’s background, begging the question as to whether in taking the drug, or when the drug or other treatment failed, did this help propel these individuals on a path towards the destruction of others.[5]