Voxel X Network welcomes Julian C Broadus to their expanding team. Voxel X is a state-of-the-art financial gaming ecosystem that is using smart contracts as an investment revenue to support the gaming industry. 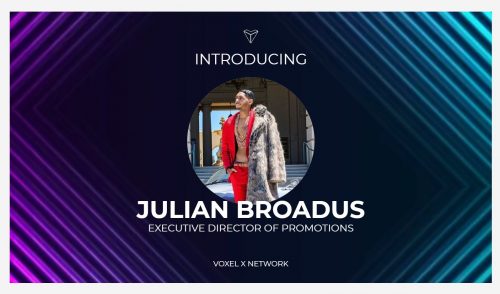 Voxel X Network is proud and excited to announce an exclusive partnership and addition to their team by welcoming Julian C Broadus. Mutual agreements were finalized earlier this week, and this partnership marks the release of Voxel X Network’s largest global campaign to date. The campaign will soon be launching globally; in the United States, United Kingdom, Europe, Canada, Australia, China and Japan.

Julian, who is known worldwide, comes with a huge background in the music industry, celebrity real estate and gaming. His first introduction into entertainment began with his father, Snoop Dogg, who brought him around the industry. Guided by an icon, Julian eventually moved forward to pursue his own interests. In 2007, he took his first step to become a more serious online gamer. He has prioritized gaming while building his own brand and mantra. “My favorite part about gaming is the ability to perfect your own craft based on the amount of repetition you pour into it.” Julian said. “It is a very valuable and key lesson I live by to this day.”

Julian has also focused his interests in investments, recently becoming a “Celebrity Agent” in Los Angeles to help his community purchase their next estates. Julian was introduced to the crypto world in 2015 by a childhood friend, just as the world of digital currency had started to find its niche. His quest to find a perfect mix of opportunity and reward has allowed Julian to find the team at Voxel X Network. Julian saw their vision and mission and was eager to join and help push the organization to the next level. Julian will work directly with their operations and outreach teams as he helps amplify the importance of diversification of wealth throughout his community.

“Upon launching we are thrilled to have Julian come aboard the Voxel X team. He brings many things to the table; a young and fresh mindset and a common love for gaming. Many would say he “speaks our language” as he understands our love for crypto. Not only that, he also understands the value of decentralized finance and the impact that Voxel X will have in the gaming and entertainment world.” – Sophie Kovalevskaya, Creative Project Lead – Voxel X Network

Voxel X Network is creating a new standard in which the average person is able to interact. All parties can mutually benefit off the vast amount of resources Voxel X Network has to offer and they strive to make partnerships with people that are passionate about their mission.

“I am very anxious and excited to help bridge the connection between gamers and developers. At the same time, I’m seeing how the crypto gaming industry will be molded by Voxel X!” Julian, Executive Director of Promotions – Voxel X Network

By partnering with legendary partners like Julian, Voxel X Network is spreading the message to gamers worldwide – leverage gaming, expand revenue opportunities, build wealth. They will be giving access to the same advanced technologies that have historically only been available to those “elite” enough, thus making it available now to everyone. Julian joins Voxel X as the Executive Director of Promotions and this alliance is just the beginning of many exciting things to come for Voxel X Networks and they are proud to welcome Julian to their team!