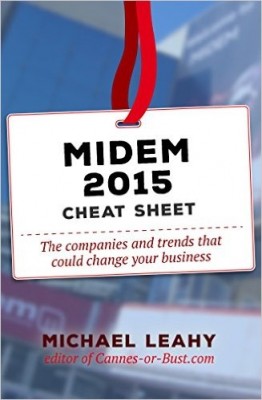 The Midem 2015 Cheat Sheet report looks at two critical issues that will change the way the music business functions over the coming year, with an analysis of the key players and innovators that attended the event.

Following the latest Midem music business trade fair in Cannes last June, consultant and editor of Cannes or Bust Michael Leahy has drawn up a concise report of the two major issues that will affect the music business over the coming year. “For me, the discussion around streaming – though important – is increasingly overshadowed by the issue of data,” says Leahy. “It might seem unsexy, but data management and analysis is a growing motor of the business. Probably most facets of the business are now driven by data, and the smart executives are the ones that will harness the power within this data.”

He points to the fact that data analysis allows a better understanding of music consumers as one example. But there are also major benefits in using data and metadata for SEO purposes. “Just adding lyrics to a webpage, for example, can boost its ranking, as people actively look for song lyrics on the web. Combining better insights with greater SEO visibility will enable new revenue streams to be perfected.” The Midem 2015 Cheat Sheet also throws the spotlight on a technological innovation that could revolutionize how the business is run: blockchain technology. Perhaps best known as the backbone on which crypto-currencies such as Bitcoin are run, blockchain technology also allows for a radical re-think of how revenue is handled in the music business. To put it simply, it allows for almost instantaneous distribution of monies generated online, notably revenues coming from streaming.

The implications are wide-ranging, from artist royalties to publishing revenue. “A system that is this fast, secure and transparent will rapidly by-pass existing practices and allow for a leaner, fairer system,” says Leahy. The report also includes a selection of 17 services that either enable new revenues to be generated or optimize existing sources. Again, data plays a role, as several services can analyze videos on YouTube and pinpoint where there are revenue bottlenecks. Another allows the mass uploading of catalogues to harness YouTube’s upcoming streaming service. The Midem 2015 Cheat Sheet is available on Amazon Kindle. For further details, contact Michael Leahy or visit Cannes or Bust.

For more information about us, please visit http://cannes-or-bust.com