Officer Matt Talks About His Nissan Skyline GTR in Denver

The interview by Montu Motors has already gone viral, racking up 1.1 Million views on Facebook

On August 1st, 2014, history was made when the first 100% legal Skyline GTR crossed from Canada into the United States. First reported by a Yahoo
News article, the Skyline rolled over the boarder at exactly 12:01am, and Montu Motors was the first Auto Dealer to import a legitimate 1989 GTR R32.

When Denver police officer Matt heard that the R32 was available for purchase he dropped his plans to get a 2009 GTR and instead go for the newly legal 1989 version. Now, a year and a half later, Montu Motors interviewed Matt, and the resulting video has already been watched by approximately 1.1 million viewers.

According to the Youtube Video featuring Matt’s interview, after the car arrived at Montu Motors in Tampa Florida, Matt met the team at the airport and was picked up in the GTR. They let him test drive it for as long as he wanted, and they closed the deal that same day. 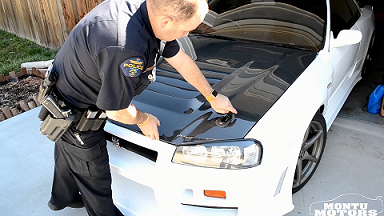 After a long trip back to Colorado, Matt pulled into an auto parts store to pick up everything he needed for an oil change. Still dirty from the trip, a group 25+ highly modified Subarus pulled into the parking lot and surrounded Matt’s GTR. What at first looked like a threatening posture was actually a group of car enthusiasts marveling at his exceptionally rare Skyline. Matt then spent the next hour and a half talking about his new purchase.

“You feel like a rockstar driving one of these cars,” says Matt. “People follow you into parking lots, they give you thumbs up and wave at you, and you see the looks of shock.”

Matt’s R32 is one of the most highly sought after GTRs ever produced. With a RB26DETT motor, it offers unparalleled performance and speed. It transfers 50 percent of the total power from the rear wheels to the front wheels, which gives the driver an unprecedented feel for the road. After his purchase, the only upgrade Matt made to the car was to install a carbon fiber hood and replaced the alternator.

Matt’s car is one of many JDM imports that Montu Motors has brought to the streets of America. The company, which was founded in 2014, specializes in dealing with cars that exceed the 25 year exempting the cars from emissions &amp; safety requirements (EPA &amp; NHTSA exempt). “We have a stronger passion to get these cars onto the roads than we do for making huge profits,” says a company spokesperson.

The video of Matt’s experience with Montu Motors and his Skyline has already gone viral on Facebook with 1.1M views, 16k likes, 21k shares, and 2.5k comments. According to the statistics, it already has 1.2M minutes of view time, which calculates to roughly 2.5 years. Those numbers are expected to grow exponentially in the weeks ahead.

To learn more about Montu Motors, their inventory, and Matt’s interview about his Skyline GTR R32, please visit: http://www.montumotors.com/

Founded in 2014 by a team of automotive enthusiasts, Montu Motors specializes in bringing exceptionally rare JDM imports to the public. They are a Licensed, Bonded &amp; Insured Auto Dealer and Importer located in Tampa, Florida. All their cars are 100% federally legal based on the 25 year exemption rule, exempting the cars from emissions &amp; safety requirements (EPA &amp; NHTSA exempt). On August 1st, 2014, Montu Motors were the first auto dealers to legally import, register, and insure an R32 Nissan Skyline GTR into the United States through the 25 year exemption rule.