Panda Film Media, an Internet media technology company headquartered in the United States, launches Box Office Boost App to prevent excellent films from being buried, to better obtain Internet reputation, and to help the development of the film and television industry. In this app, film and television investment producers can invite users of the app to buy tickets to watch movies, and users can also comment on the box office booster app to increase movie reputation, attracting potential moviegoers, and further increasing movie box office.

The global theatrical home or mobile entertainment market size in 2021 will be approximately US$99.7 billion with an increase of 23.85% over 2020 and not including the pay-TV subscription market. The global theater market grew by 81% to $21.3 billion as theaters reopened. With the gradual recovery of the epidemic situation, the cold winter of the global entertainment industry will finally pass. The release of “Spider-Man: No Way Home” at the end of 2021 has brought the monthly box office of some countries and regions back to pre-epidemic levels, proving that audiences can still be drawn back into cinemas with a supply of quality content, keeping faith in the future of the film industry.

In this context, Panda Film Media was born, and launched a box office boosting APP according to user needs, dedicated to the exchange of film and television cultural and artistic activities, as well as technological innovation and application.

With the in-depth development of film industrialization and marketization, the concept of “marketing is greater than film” has become more and more important. In the context of the rapid development of the Internet, online word-of-mouth marketing has gradually demonstrated its unique power and has become an important factor affecting the market. In the era of Web 2.0, users can interact with the content on the Internet, and the Internet word-of-mouth of a movie can even decide the life and death of a movie. It has become the primary consideration of various film distributors about how to obtain a better reputation in the film market and get more box office. 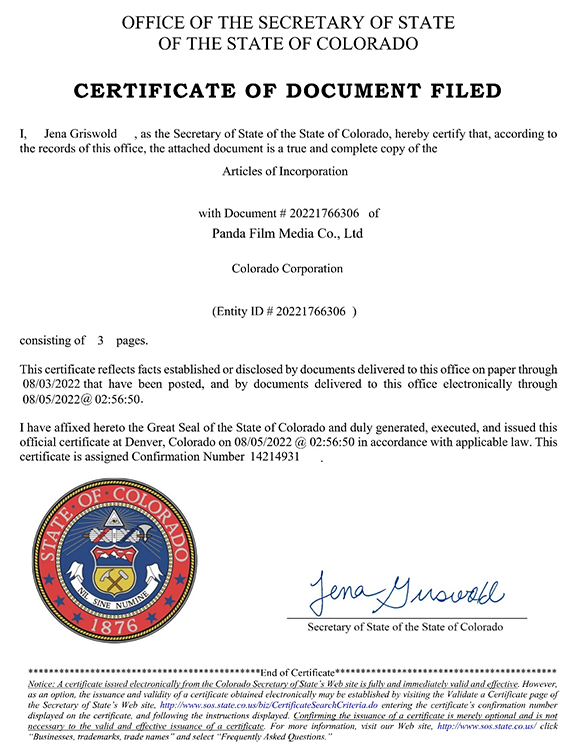 Through market research, Panda Media’s Box Office Boosting App has launched a box office boosting model that enables film and TV investment and production companies to rank their films and TV productions well in the box office charts, and at the same time increase the release rate of their films and TV productions in major cinemas and streaming media platforms, increasing exposure and attracting audiences to watch the films and further fermenting word of mouth, forming a virtuous cycle. On the other hand, App users can watch excellent movie works in the first time, and receive commission income provided by film and television investment and production companies. Panda Media can obtain traffic and industry chain resources, and the three parties can achieve win-win cooperation and contribute to the sound development of the film market.

The main operating partners of Panda Film Media are composed of global film and television investment producers and distributors, including world-renowned film and television entertainment giants and well-known directors and creators. The global film and entertainment industry will inevitably gain more room for development in the post-epidemic era under the action of Panda Media.