Averaging almost 80 calls a month from people calling about a friend or loved one who has been Baker Acted, CCHR finds all too often that the victim did not meet the criteria under the law and should not have been taken into custody. 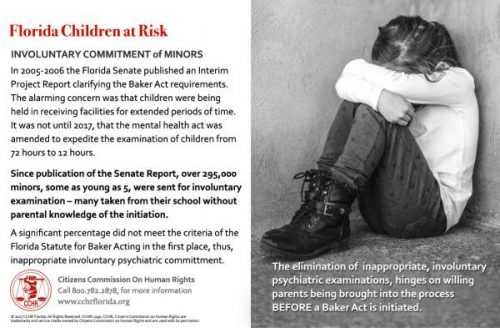 “Every day in Florida someone is held for involuntary psychiatric examination (Baker Act) for the scantiest of reasons.” This is according to Stephen A. Talmadge, PhD and a Diplomate of the American Board of Forensic Psychology.

The Baker Act mental health law allows Florida citizens, including children, to be sent against their will for involuntary examination at psychiatric wards known as Baker Act Receiving Facilities and held for up to 72 hours during which time, they may be drugged without their consent if ordered. [1]

Furthermore, according to this Act, the Receiving Facility may apply to hold a patient for much longer than 72 hours and bill Medicaid for doing so. [1]

Hospitalizations of children are sometimes used as stop-gaps for school systems or parents unable to care for difficult children. [2]

In 2017 the Florida chapter of the Citizens Commission on Human Rights (CCHR) helped secure the safe release of nearly 300 people being unjustly held for involuntary psychiatric examination.

CCHR is a non-profit mental health watchdog organization established in 1969 jointly by the Church of Scientology and noted psychiatrist Dr. Thomas Szasz to expose and eliminate human rights abuses in the field of mental health.

CCHR maintains a hotline for Baker Act abuses and has helped large numbers of people secure release when unjustly restrained under the Act. An article on Baker Act violations has prompted a stream of intermittent responses over a 5-year period. One such entry stated “I’m covered in bruises, was given multiple injections without my consent, and all of this to be told that ”actually, you don’t fit the criteria to be Baker Acted; we’re releasing you”. [3]

“Our Psychiatric Abuse Hotline averages almost 80 calls a month from people calling about a friend or loved one who has been Baker Acted and unfortunately all too often the victim did not meet the criteria under the law and should not have been taken into custody and sent to a psychiatric facility,” said Diane Stein, President of CCHR Florida.

About CCHR: CCHR’s mission is to eradicate abuses committed under the guise of mental health and enact patient and consumer protections. It was L. Ron Hubbard, the founder of Scientology, who brought the terror of psychiatric imprisonment to the notice of the world. In March 1969, he said, “Thousands and thousands are seized without process of law, every week, over the ‘free world’ tortured, castrated, killed. All in the name of ‘mental health.’” For more information visit, www.cchrflorida.org

[3] FLORIDA’S BAKER ACT IS A DANGER TO ALL http://www.cchrflorida.org/floridas-baker-act-is-a-danger-to-all/