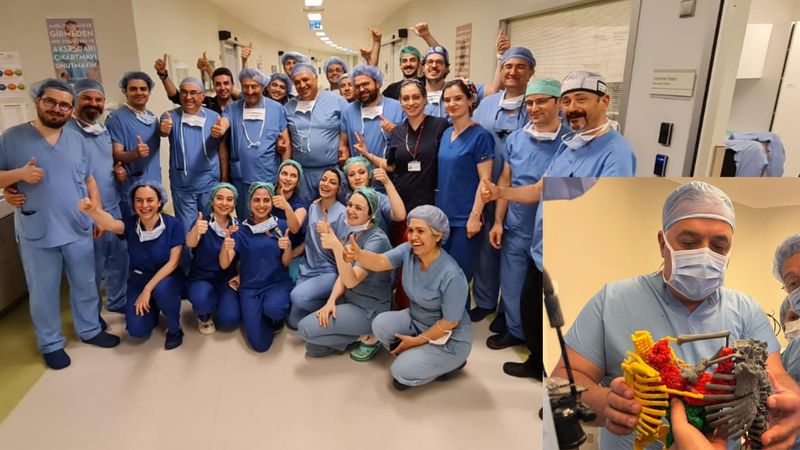 A Turkish medical team has successfully separated conjoined twins shortly after birth by employing a range of innovative techniques, including virtual simulations and 3D modeling. Carried out at Istanbul’s Acibadem Hospital, the successful procedure set a new world record for the fastest-ever operation of its kind.

“Thanks to our team of dedicated professionals, we were able to separate the twins in a well-planned surgical procedure that took about nine hours,” Prof. Mehmet Veli Karaaltin, who supervised the operation, says. He is an M.D. specialized in aesthetic, plastic and reconstructive surgery.

As a result of the procedure, the twins, who were born conjoined at the breastbone but has two hearts, were both able to survive on their own. Born in Algeria, the twins are now in stable condition, where they remain under observation.

Prof. Karaaltin’s team included dozens of medical experts and specialists, who employed a number of novel techniques to bring the procedure to a successful conclusion. These included virtual simulations that allowed doctors to predict the effects of the operation in advance.

“These simulations helped us preempt any potentially fatal injuries the twins might have otherwise sustained,” explains Prof. Karaaltin, who has performed a number of successful operations in the fields of micro- and reconstructive surgery.

In another first, decellularized placenta membranes, developed in Turkish laboratories, were implanted in the patients using the Endo-vision method. “We also created a biocompatible scaffold with a 3D bio-printer that allowed us to rebuild their anterior chest walls,” Prof. Karaaltin says.

Conjoined twins are believed to be caused by aberrations experienced during embryonic development. The phenomenon occurs in approximately one out of every 50,000 births, and most cases – roughly 60% – result in stillbirth.

Prof. Karaaltin’s successful separation procedure has aroused considerable excitement in the international surgical community. “We’re proud to have made medical history,” he says. “The cutting-edge techniques that we used in this operation will no doubt save countless lives in the future.”