Following a one-year, Covid-induced hiatus, Art Basel is set to return next week in Miami, where the work of Temel Nal will be shown simultaneously at two separate art fairs. 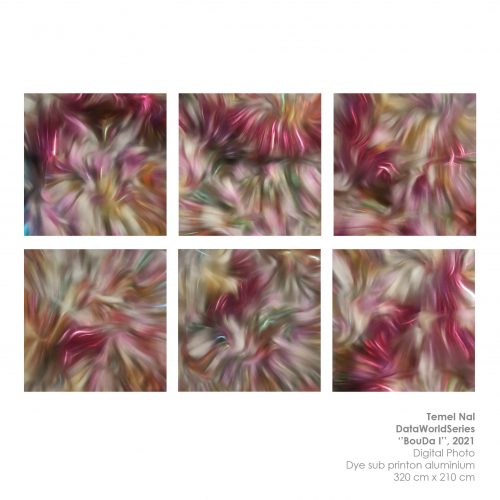 Following a one-year, Covid-induced hiatus, Art Basel is set to return next week in Miami, where the work of Temel Nal will be shown simultaneously at two separate art fairs. Nal’s haunting artwork highlights the contrast between the aesthetics of nature and today’s increasingly digitalized reality.

Work by prize-winning photo artist Temel Nal will be featured in two separate shows at Miami’s upcoming Art Basel Week from Nov. 30 to Dec. 5. 2021. This annual event is widely regarded as the most important in the international world of contemporary art.

Contrasting natural aesthetics with those of 21st-century technology, Nal’s work will be shown during Art Basel Week at both the SCOPE and the CONTEXT art fairs. The latter will feature a triptych of works from Nal’s “Mask Series,” which drew critical acclaim at earlier showings in Spain, Monaco, France and New York. A veritable explosion of color, the evocative oeuvre is set to take center stage at the Steidel Contemporary, Nal’s exclusive gallery in Florida’s upscale Palm Beach district.

To be held alongside Art Miami at its prestigious waterfront location, the CONTEXT Art Fair is known internationally for providing a platform where serious collectors can find and acquire new work by up-and-coming visual artists from all over the world.

The series begins with striking images of pink, abstract blooms, expressing the glorious aesthetic of the natural world in its untouched, idyllic state. It goes on to convey the ever-mounting tension between nature and what the artist calls “DataWorld” – eventually climaxing in Tal’s dramatic 15-piece work, “TreesAgainstData.”

Perhaps the most iconic work in the series is its striking sixth piece titled “BouDa I” (2021). Consisting of six 100cm x 100 cm panels (digital photo, dye sublimation prints on aluminum), Nal produced this monumental piece with the generous support of his patron, Turkish-English conglomerate UnieExpress International.

‘Feeling Color, Sensing Light’
Chosen as one of the most promising new international artists by ARTMARKET Magazine in 2019, Nal has shown his work at leading art venues all over the world. In the past two years alone, his distinctive artwork has been featured at prominent galleries in London, Milan, Madrid, Paris, Nice, Montreal and Istanbul.

Citing color as his creative entrée (“I feel color; I sense light”), Nal started out with an analogue camera, later switching to digital with the advent of that technology. Entirely the result of his own photographic technique, Nal’s work is free of any post-production manipulation.

Nal was selected to take part in this year’s SCOPE exhibition, along with two other Turkish artists, by Nazan Aktan, founder and president of L’Association des Artistes Contemporains de Turquie à Paris (ACT). Sponsored by Turkey’s Ministry of Culture and Tourism, work by all three artists will be showcased during the fair at the Gallery Artistes Contemporains Turquie.